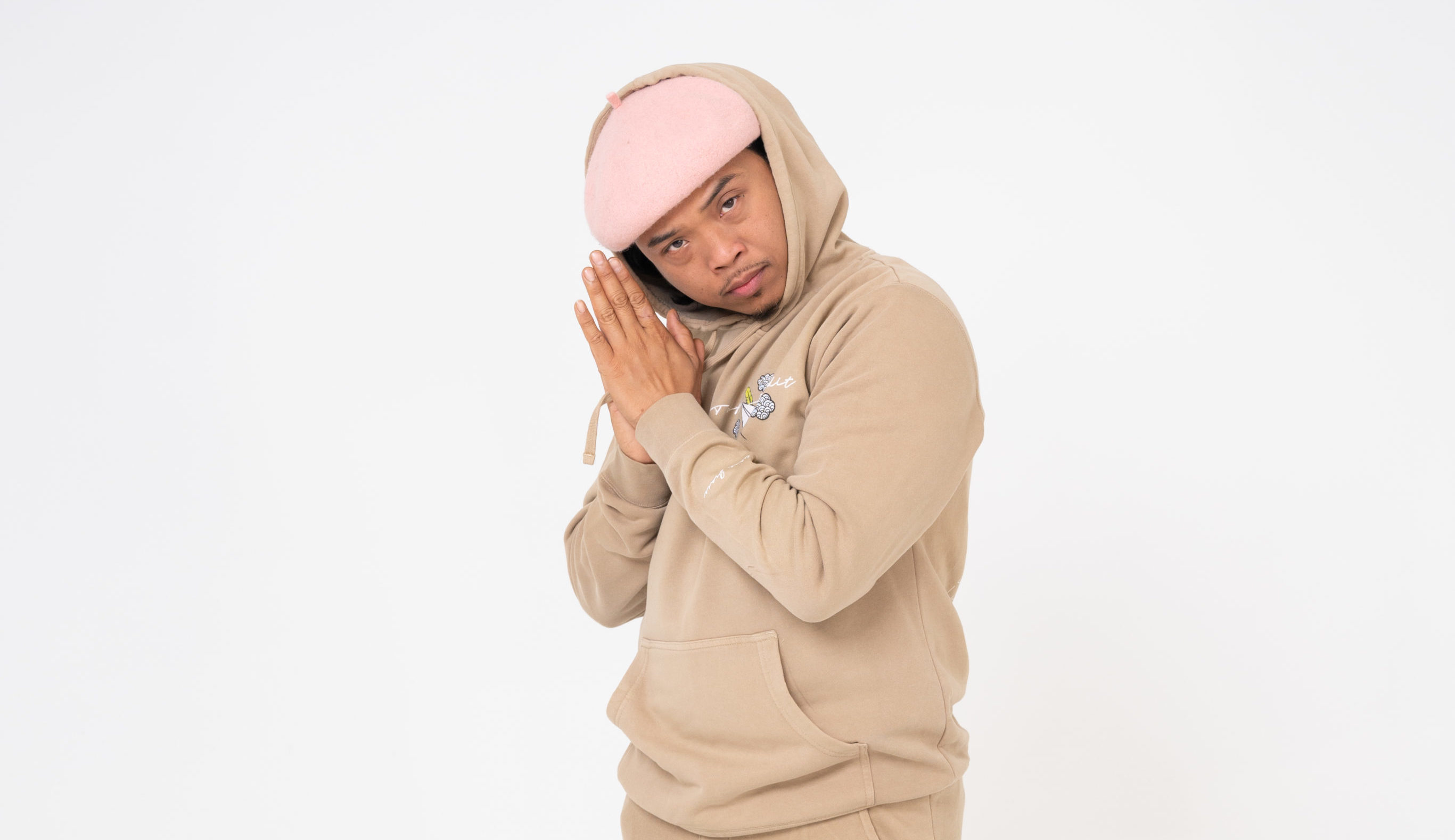 “As my platform grew, I’ve tried to grow with it.”

When stylist and designer Sandy Gill launched her content platform nearly a decade ago, it was with the intention of providing a resource for “people who wanted to find confidence through fashion.” Fast-forward to today, and Gill’s reach — and ethos — has expanded to embrace a broader type of support. And with the introduction of her unisex athleisure label Tuff Banditz last year, Gill is able to satisfy both her love of clothing and desire to educate, empower and provide visibility for others in her community and beyond.

“I’ve learned a lot about what I want to share with the world,” she told FASHION over a video call in mid-May, shortly after Tuff Banditz’s new collection — called Land with Grace — dropped via the AI-driven design company Urbancoolab. “As someone who’s been in the fashion space for almost eight years, it took me a long time to figure out what the story is that I want to tell, and what impact I want to make in this space. It’s become a lot clearer, especially with the pandemic.”

Gill, who is also an elementary school teacher, says that a number of personal losses, as well as witnessing people around the world lose everything from jobs to loved ones, provoked her to explore the concept of experiencing loss for Tuff Banditz’s second offering. Urbancoolab used its AI tech to graphically translate imagery — from moving boxes and calendars to paper planes — that convey the spirit of the idea on an array of boldly-hued leisurewear pieces. You’ll also find phrases like “Land with Grace,” a statement that carried Gill through tough times and that she’s imparted to others enduring difficult moments.

She also addresses the notion of loss through the amplification of an urgent and global issue: Climate change and the climate migrant crisis. “I want to tell stories through each collection and have these collections create impact for people in communities that are hurting,” she says of why she homed in on highlighting the topic when creating the new pieces. “So many people have been displaced,” Gill says, pointing to those around the world struggling to re-home after fleeing environmental hazards from drought to floods. A report by the World Bank suggests that by 2050, “Sub-Saharan Africa, South Asia and Latin America could see more than 140 million people move within their countries’ borders.”

To enhance her commitment to this urgent matter, Gill is donating proceeds from sales of the new collection to Structure, an organization that provides displaced communities with sustainably-minded housing. And she credits friends working in the climate activism space and the folks at Structure for also enlightening her about environmental issues, personal impact, and how small steps can actually amount to big differences.

“[This] topic always scared me,” she says about the impact our daily lives have on the environment. “It’s looming over our heads, and could kill us. It’s the scariest thing to think about. And I avoided thinking about it for a long time because there are so many things you think you have to change if you want to make change; it can get very overwhelming.”

There’s so much to be overwhelmed by these days, and Gill says she’s mindful of taking time to process and reflect on current events of the past year in particular, and how to best serve those who need their voices heard. “As my platform grew, I’ve tried to grow with it,” she says, nodding to her activism around the groundswell of the Black Lives Matter movement and the farmer protests in India as two opportunities to shed light on crucial events and their implications the world over.

“I realized that if I don’t use my platform to share these stories, my platform is useless,” she says, adding that the farmer protests directly affected her family, and the censorship framing the events caused her to lose engagement and followers. “If we don’t speak up,” she rightly asks, “who will?”

Gill also positions her projects as a way to illuminate people closer to home who deserve attention, such as the models featured in her new collection’s imagery. “I wanted to pay homage to BIPOC and AAPI Toronto-based creatives,” she says. “Those who’ve tried to make the best out of the worst during the pandemic.” The group includes dancer O’Shani ‘Ocean’ Cardwell and comedian Norm Alconcel.

And let’s not forget Tuff Banditz’s first collection, Working Class Heroes, which was inspired by Gill’s father (who also starred in its campaign). The pieces boasted renderings of Punjabi fabrics and graphics like cab signs in a tender tribute to her taxi-driving dad.

With all these uplifting ideas constantly brewing within Gill, one has to wonder how she manages it all in the face of enduring stress and struggle. “I’m still learning that I have to take care of my mental health,” she says. “Being with kids every day reminds me of it. I need to be in a head space where I can be with them, and not allow negativity to affect my students.”

She says that she’s dug deeper into “healthier self-care” methods from journaling — “That took a long time to be comfortable with but I carry a journal with me everywhere now,” she notes — to “grounding practices” such as prayer and meditation. And she’s found great appreciation for therapy sessions. “I especially tell this to people in the South Asian community who are afraid to do it — once you find someone you’re comfortable speaking with, [they offer] outside perspective and they have the knowledge and education to help you.”

Now equipped with such ways to navigate through what life reveals to her on personal, professional and communal levels, Gill speaks of the future with enthusiasm — particularly when it comes to mentioning that she’s hoping to launch a collection based around the “Sandy Suit,” a look made in collaboration with Brampton, Ont.’s Sahiba Fashions that was worn by Utkarsh Ambudkar to the 2020 Oscars, taking it from a now custom-made model to ready-to-wear. “I’m excited to keep going,” she says. But we can rest assured she won’t forget where she came from.