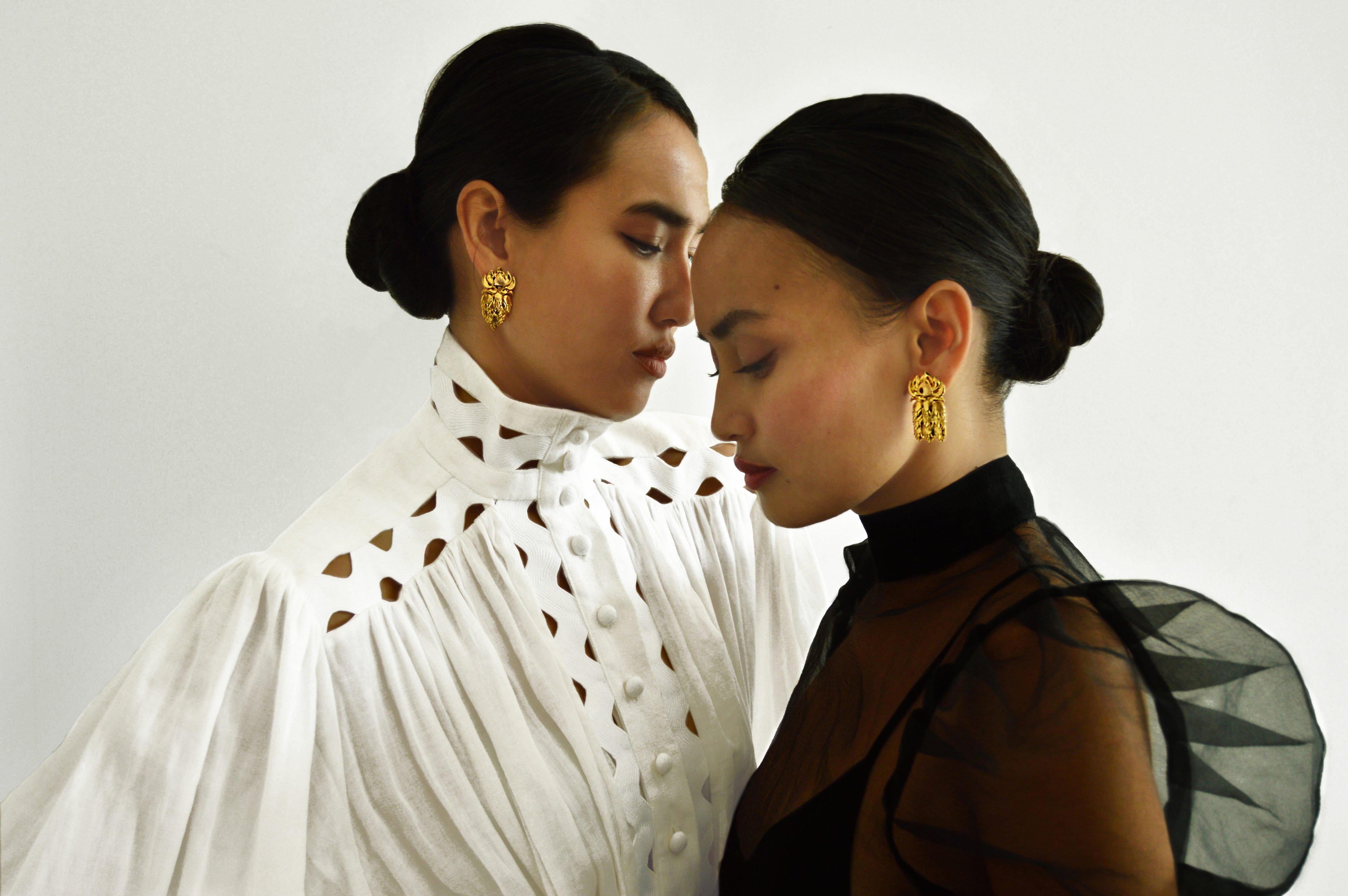 “We’re having fun and that’s all that matters for now.”

If you’re looking to up your accessory game (applicable to both video call moments AND emerging into the wider world one day), New York-based jewellery brand Edoeyen offers pieces that are both significant and spectacular. Founders and sisters Edo and Eyen Chorm launched the label late last year, inspired by their Khmer roots and the legacy of finery within Cambodian culture.

“Not a lot of people know about it,” Edo notes of the Angkorian civilization; the mythology of this ancient Buddhist/Hindu society, found in the region now known as Cambodia, mesmerized the duo as children. Edo was born in Cambodia and her sister was born in Thailand; their family had fled Cambodia in the wake of the brutal regime of the Khmer Rouge, living in Thailand and the Philippines prior to traveling to America “seeking a better life,” says Edo. “We were literally rolling stones, as it was part of the grueling process of seeking alyssum as refugees.” Despite the distance to their ancestral country, the pair’s parents ensured a piece of their heritage was always with them.

“Our mom always told us stories about the Angkorian people,” Eyen says, adding that they also watched movies made during the 1960s and early ‘70s which featured the elaborate traditional costuming of the Royal Ballet. The sisters also learned about the lavish jewellery worn by Angkorians thanks to participation in Cambodian classical dance during their youth. Edo says she was always entranced by the regalia worn by older people in the troupe, and aspired to one day don such extravagant pieces herself.

Thanks to their mutual experiences in the fashion world (Edo is a graduate of the Fashion Institute of Technology and Eyen used to model), the two eventually came to the idea of creating a jewellery line that honoured their Khmer identity, preserving the artistry of historical accessories while infusing a sense of modern cool into the range.

Edoeyen launched with its Face collection, composed of the Neang Neak ear cuff, the Phkachhouk 1.0 and 2.0 earrings, and the bold Kbang crown. Fashioned in New York City’s Diamond District from a choice of either precious or costume materials that are either recycled or new and ethically sourced, the pieces are certainly beyond the ordinary. And that’s exactly the point.

“I love tiaras,” Edo says when highlighting the Kbang’s crowns design and how it instantly elevates a look to royal status. She adds that the piece took a long time to bring to market because of its size and the complication of the design. In fact, all of Edoeyen’s offerings possess a level of intricacy that has largely been absent from the contemporary jewellery landscape thanks to a focus on daintier, minimalistic pieces in recent years.

The sisters, who are self-taught in the area of jewellery design, emphasize that an element of theatricality and grandeur has to be retained in their concepts. After all, they’re reminiscent of the accessories worn by kings and queens. The Neang Neak ear cuff, for example, is an homage to Queen Soma, the purported original monarch of Cambodia. And the Phkachhouk earrings are meant to symbolize hope, rendering the revered Lotus flower in two stages of its growth. The design was influenced by the only publicly-known pair of ancient royal regalia earrings in existence, which are displayed at the National Museum of Cambodia.

While Edoeyen’s pieces amplify the traditions of their ancestry, Eyen says that she and her sister are excited to “bring the designs to the world.” Edo adds that such cultural representation also “helps people have a voice in the [fashion] industry.” The duo recently dropped a teaser from their upcoming Hand collection, due out this summer; a ring boasting a wrap-around serpent-style silhouette.

“We didn’t create this brand to meet a demand,” Edo notes of their measured and curated approach to collection ideation and releases. “It’s to grow an appreciation of this type of art. I know it goes against all the marketing rules, [but] we’re having fun and that’s all that matters for now.”