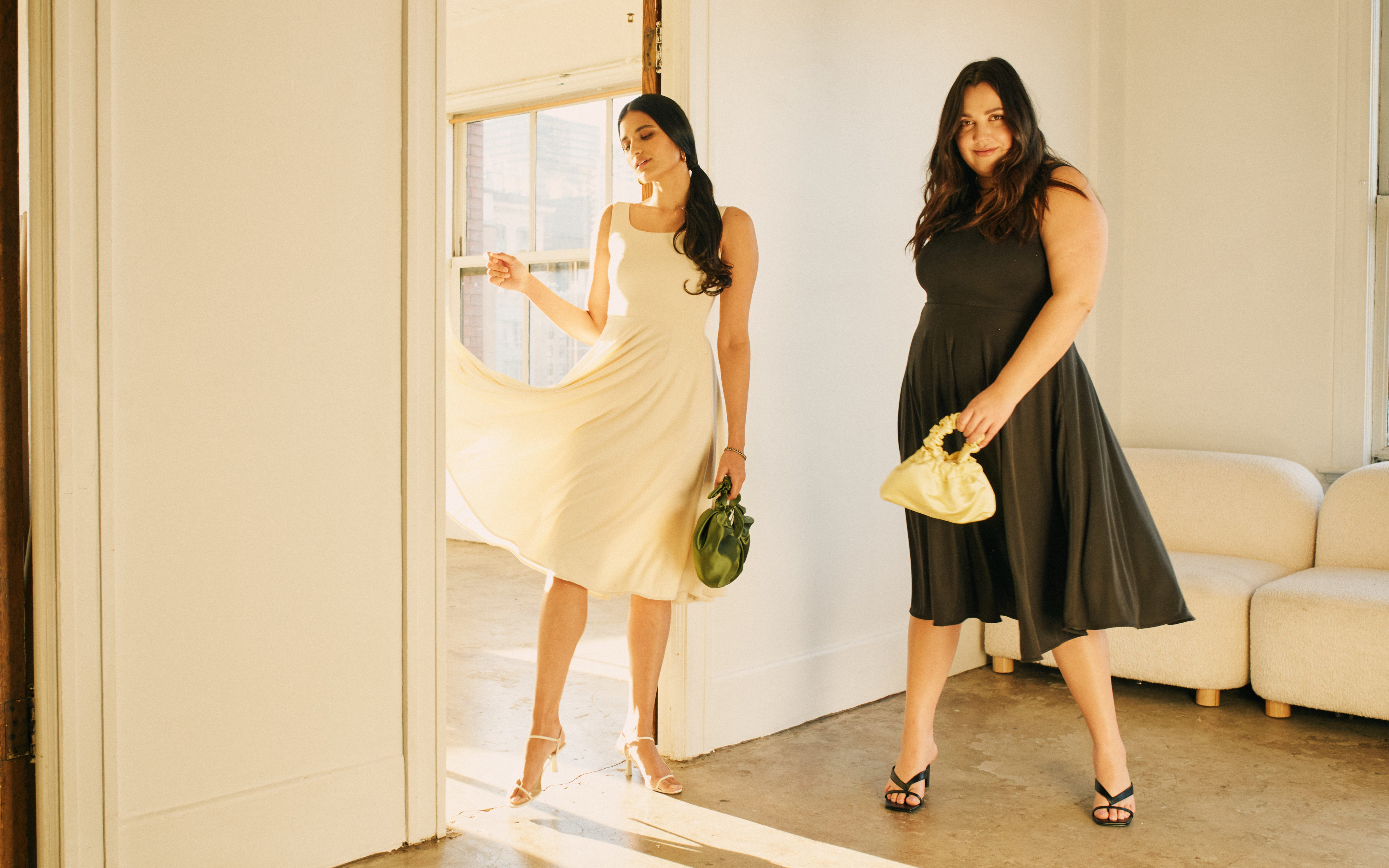 Plus more on its limited-time promotional collab with Poppy Barley.

“Instead of just selling clothes, how do we stand for something?” It’s a question the founders of Lezé, Tanya Lee and Karen Lee, have pondered since launching their values-driven brand in Vancouver several years ago.

The original concept for Lezé is more timely than ever, as Tanya was inspired by her friend’s penchant for wearing pyjamas out in public — and “not the silky, stylish kind,” Karen laughs — before maximum-comfort dressing became the norm for many of us over the last year.

“We thought, what if we create something that felt like pyjamas but had the structure of something you could go to work in?” Karen recalls about the ideation phase of Lezé coming to life. And it was essential for the duo to focus on how to make these pieces as ethically and sustainably as possible, she told FASHION during a Zoom call earlier this week. “There’s so much waste in the world — why not use what exists?”

Karen points to her partner’s experience in the textile realm of the fashion industry as being extremely valuable for their brand’s evolution; Tanya is the vice president of Tobimax Textiles, the manufacturer of Lezé’s range of haute casual garments that has facilities located in China and Taiwan. It’s been crucial for Tanya and Karen to be transparent about their brand’s practices, and visitors to the Lezé site can learn more about the compensation and working conditions of the people making their products.

She goes on to speak of the DMs, emails and comments she and Tanya receive from customers regarding their overseas production. “We’ll get written off,” Karen says. “One comment we’ve heard was, ‘That’s unfortunate. I prefer Canadian, not Asian-made.” While obviously hurt by such sentiments, Lezé’s founders use their platform as one of education and advocacy. “There are a lot of conversations that need to be had, and it’s an opportunity for us to speak on [this] because we know.”

It’s harmful to ignore how a swell in acts of racist aggression and violence towards people in Asian communities is linked to the stigma attached to offshore manufacturing — despite the fact, as Karen points out, that it extends far beyond fashion to include a great portion of the other items we rely on every day (our virtual life lines, the cell phone, included).

“Don’t get me wrong, there are a lot of bad manufacturers,” Karen says. “That’s where the negative perception comes from. [And] people don’t know what they don’t know. I don’t blame people for not knowing, but it would be great if they went into being better educated without having the bias that whatever is made overseas is bad.”

“Oftentimes if you manufacture overseas, you don’t actually know how things are done unless you go there yourself,” Karen continues, adding that the notion of something being made “ethically” or “sustainably” isn’t interchangeable.

These conceptual connections are so vital but also largely nascent, in part because historically, fashion brands have been hesitant to share trade information in order to play into the idea that something that’s exclusive is inherently of more value.

“It’s important for us to show where our clothes are made,” she says. “And it’s a taboo subject in fashion; for some brands, their factory is their ‘secret sauce.’ [But] we want to open up the conversation and break the stigma of something being made in Asia being of bad quality. There’s so much good technology out there that we want to shed light on!”

She highlights how far ahead a country like Taiwan is in terms of working with textiles fabricated from recycled and waste sources. Since launch, Lezé has offered designs crafted with materials made from plastic bottles, coffee grounds, fishing nets (their “hero” material, Karen says), and most recently, the cellulose from sustainably sourced Beech trees. It’s turned into Lenzing Modal, a much-touted material in the eco-friendly fashion space.

The Beech Trees collection, which was introduced last month, “took a long time to come up with,” Karen says. “It reflects the time we were having as a company. We were in a lot of production debt, and we found ourselves leaning into the idea of being planted, not buried, and took the inspiration from the journey of [a] tree. They spend a lot of time growing roots underground, and nobody can see them…there’s this idea of building a foundation, and that when they emerge from the soil, the only way they go is up.”

Not only does the philosophy of this new collection call out to a current moment where we’re all undoubtedly feeling a bit buried ourselves. It will also resonate with those of us still looking for a leisurely approach to dressing given the soft, sultry silhouettes offered such as the breezy Monterey jumpsuit and Mira cardicoat.

Happily, this particular piece — which fuses the coveted slouchiness of a well-worn sweater’s with a tailored topper — is part of a promotional sale Lezé just launched with the Albertan eco-minded accessory brand, Poppy Barley. Between now and April 12, if you purchase the Mira cardicoat in any colour or Poppy Barley’s Polished mule in black, you’ll receive a discount to shop the other label at 15% off. (The two female-founded companies have also joined forces for a pop-up event, with Lezé pieces appearing in Poppy Barley’s Edmonton and Calgary boutiques until May 2.)

The spirit of collaboration seen here trickles into all facets of the Lezé ethos, with Karen and Tanya paying close attention to the wants and needs of their customers through regular follow-up calls for purchase feedback. Karen says that this is also one important way in which they can work towards even further sustainability within the brand’s output, given that refinement in design and production choices are integral to having an eco-friendly approach. “We use an app called Inventory Planner,” she adds, “that tells us how and what product is moving. [It’s a] constant journey of gathering data and feedback.”

This emphasis on technological and community-centric progress-over-perfection is working for Lezé, but Karen says they’re careful not to clutter their minds with the grand totality of what “mindful design” really means. “In the sustainability space, it’s easy to get on that judgemental side,” she says. “Looking at your progress versus someone else’s instead of just looking at your personal progress.”

So, it comes as no surprise that they had the idea for a collection influenced by the lifecycle of a tree. As Karen says, it’s based on “a story of becoming,” after all.