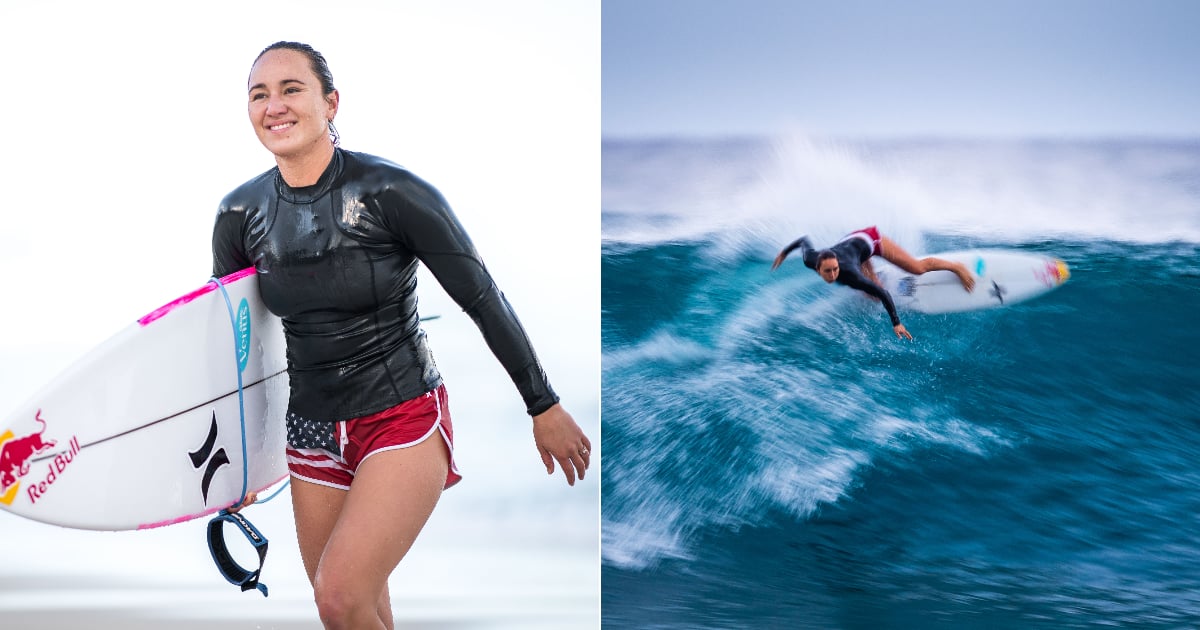 Carissa Moore is one of a handful of athletes who, despite the postponement of the Tokyo Olympics, have a secured berth after she won the 2019 World Surf League championship title (she, along with teammate Caroline Marks, is provisionally qualified). If all goes as planned, surfing will make its debut this summer, and Moore, a four-time world champion from Honolulu, has her eyes set both on gold and on the waves, ready to read the ocean heat by heat.

“Being a surfer, you have to be very well-rounded,” the 28-year-old told POPSUGAR in an interview promoting Red Bull’s Discover Your Wiiings AR game, which she’s featured in until March 31. (Download the Red Bull AR app, select the surfing game, and unlock it by scanning a Red Bull can.) “So it’s not only your core, but you have to have great agility, good responsiveness, good cardio, good endurance, strength, power.”

A surfer’s training schedule, she said, is very fluid, but she typically tries to go out and surf every day with anywhere between one-hour rides to two-hour double sessions. Moore, who’s also training for the 2021 Women’s Championship Tour slated to resume in Australia next month, currently has an online trainer, whom she works with three to four times per week; she attends Pilates classes nearby whenever she can (she started Pilates last year to help with foundational movements and core strength); and she exercises on her own twice a week. Moore’s favorite way to train at home involves HIIT workouts because they keep her the “most engaged.”

Moore loves to sweat — really, she does! — and though she often includes medicine balls, bands, or other resistance equipment in her workouts, she’s a fan of bodyweight movements. For a HIIT workout, she’ll use a timer on her phone and do intervals of 45 seconds of work followed by a 15-second rest. Her go-to moves are skaters, high knees, burpees, lunge hops, and mountain climbers.

Ahead, check out five key cardio exercises Moore incorporates into her high-intensity circuits. Though this in itself isn’t a fully fleshed-out HIIT workout, you can use them as inspiration for your next sweat session!

To learn more about all the Olympic hopefuls, visit TeamUSA.org. Watch the Tokyo Olympics this summer on NBC.