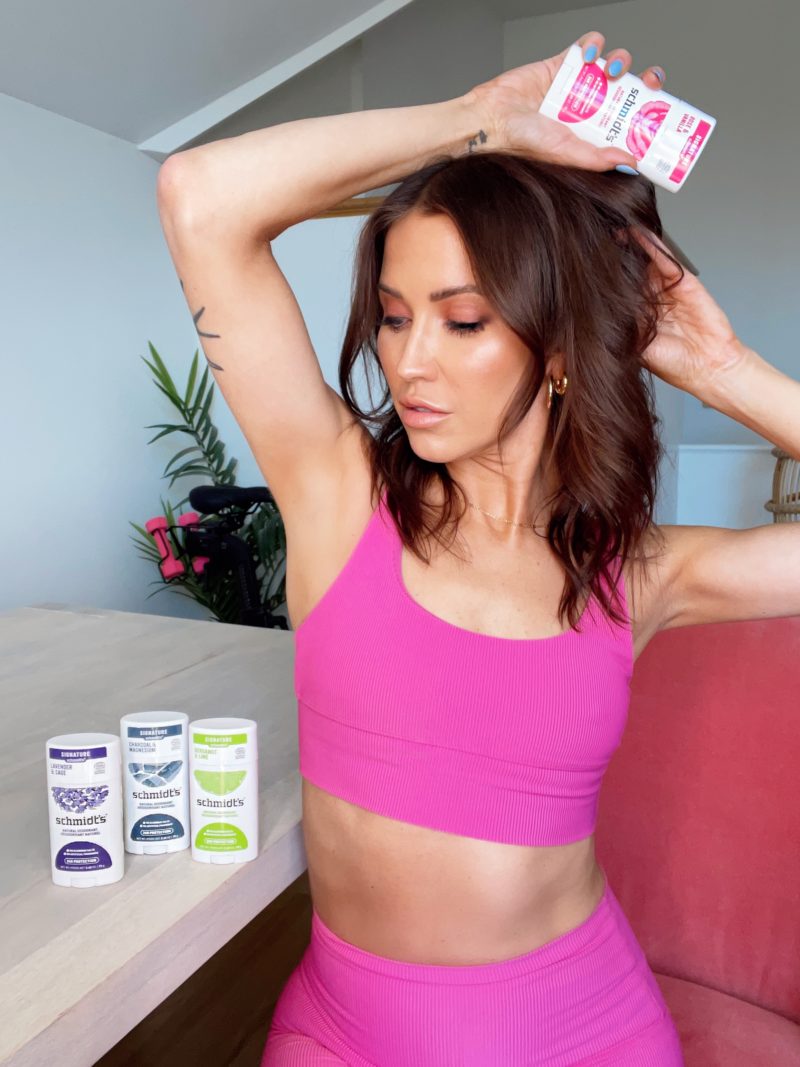 Or *fear* of body odour, that is. We spoke to the newly minted ‘Bachelorette’ host about why lockdown is the perfect time to switch to natural deodorant.

Kaitlyn Bristowe knows what it’s like to be in situations that would make anyone sweat. Take competing in the finale of Dancing with the Stars with some 60 million people watching (she won the mirrorball trophy, by the way) or dating a couple dozen men on national television as you search for a potential life partner as The Bachelorette. The Alberta-born Bristowe, who is returning to Bachelor nation as co-host of the upcoming seasons of The Bachelorette alongside fellow alum, Tayshia Adams, has been in some high-stress public scenarios. And yet, the host of the popular Off the Vine podcast decided to make the switch to natural deodorant a couple of years ago after crowd-sourcing suggestions about brands to try on Instagram. She says she hasn’t looked back.

Bristowe says her recent partnership with Schmidt’s, a brand beloved for its aluminum-free, Ecocert-certified natural formulas and scents derived from essential oils, not to mention 24-hour funk-fighting power, was a natural fit (no pun intended) because she was already a faithful user of the brand — she even wore it while competing on DWTS.

Here, FASHION chats with Bristowe about sweat-inducing situations, getting over the fear of body odour and her trick for never forgetting to apply deodorant.

When did you make the switch to natural deodorant and how did you deal with the fear that you’d be a little stinky while adjusting to it?

I made the switch around two years ago. It was really a big process for me to narrow down the best one because I did go through so many. I had heard horror story after horror story about the nasty ingredients that they were putting in the regular deodorant. So I just wanted something cleaner and more natural to put on my body.

We all cope with fear of body odour, the FOBO, if you will, and the transition period from mainstream to natural, but you have to trust the process. Schmidt’s made it pretty easy for me because it works and their products are super gentle on your skin, easily absorbed and go on really smooth. I’ve tried so many, but Schmidt’s worked for me. I really liked that they offered 24-hour protection, which gives me a lot of confidence.

How much does the scent of deodorant matter to you?

I think scent is so important. My favourite Schmidt’s one is the Lavender + Sage because it just feels like a tranquil spa relaxation [moment]. And the Charcoal Magnesium is really cool because it’s so fresh and it smells incredible.

What do you do if you forget to put deodorant?

I get FOBO and I have to deal with FOBO for the whole day! [Laughs] I should start carrying one in my purse or have an extra one just in case of that situation. But [to avoid forgetting to apply deodorant], I put it out with my skincare so I remember to put it on every morning as part of my routine.

You talk about trusting the process. Is there anything you did to cope with the fear of body odour as you transitioned to natural?

I reassured myself of the benefits because it’s really not that long of a process. At the end of the day, what is that short amount of time before switching to natural and feeling better about your decision?

Real talk: does natural deodorant hold up in really high-stress situations like a Dancing with the Stars finale or rose ceremony on The Bachelorette?

I can stand behind it and say that it did because I experienced it. That’s why I was so excited to partner with the brand because I have been using them for so long, so I really can stand behind the brand and say it took me through Dancing with the Stars [laughs]. Not only sweating from dancing, but from nerves as well!

What’s your approach to natural products in general?

I try to do research and look up products because I always tell myself that if I made the switch to natural deodorant two years ago, then I should really be invested in testing out other natural products. There are so many products out there, some even claim to be natural and aren’t, so it’s about doing the research and going on that journey and trying things for yourself.